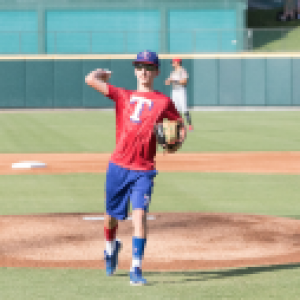 Since there is no LSU sporting event today I thought we should take some time to look forward to baseball. Today we are going to predict the starting position players that the Tigers will roll out to start the season. First off I think it goes without question that in college baseball and at LSU anything can change at any time. With that being said these may be the players at the start of the season but not the end of the season as coaches are very quick to make changes especially with the talent that the Tigers have.

Milazzo is not the greatest hitting catcher batting just .135 with 7 RBIs all of last season but Alex’s defense is second to none. The way he manages the game and can throw out runners all over the bases should give him the start behind the dish to start the season. It is worth noting that I think catcher will be a position that moves around a lot with not one permanent starter. Do not be surprised if Samford transfer Tyler Mcmanus gets a bulk of the time back there as he does have a better bat than Milazzo

I mean is there really much to say here. Tre Morgan is one of the best players in all of college baseball. Batting at the top of the lineup last season Tre hit .375 with 6 home runs and 42 RBIs. Not to mention that he is the best defensive first baseman in all of college baseball. Although this offseason much has been made of him potentially moving to center field I think Morgan is at first base and he is there to stay.

Here comes the first change from last season position-wise and it is not really much of a change. Cade Doughty will end up sliding from 3rd over to 2nd for the 2022 season. This not a knock on Doughty who is primed to have his best season yet at LSU. This is more of a move based on who we have coming in to play 3rd base. Doughty is a great player who will help the Tigers run to Omaha.

You could argue that Jordan Thompson has the most surprising season in 2021. Thompson was moved over to short from 3rd and never looked back. He is a plus defender and a great offensive player that will provide structure in the middle of the LSU lineup. One knock on him is his inability to hit left-handed pitchers from the right side of the plate. We will see how coach Jay and the staff are looking to improve that in 2022.

Oh man here is where things get fun. The new addition to the LSU Tigers, Arizona transfer Jacob Berry. Berry is one of the best players in all of college baseball and he is following Jay Johnson to Baton Rouge to be a part of the Tigers. Last season at Arizona Jacob hit 3.52 with 17 home runs and 70 RBIs don’t refresh your page that is correct. Berry is one of the best players in college baseball and will be a huge addition to the Tigers for the 2022 season.

The man who will wear number 8 for the Tigers resides in left field. Gavin Dugas is bound to have a huge season. Dugas was the Tiger’s best player in their Eugene regional victory in last year’s postseason and will be a huge part of the Tigers this season. Look for Dugas at the top of many SEC categories this year

This is really where things get tough. With 2 outfield and a DH spot remaining you have to find room for lots of talent. This is also a position where I think it will be a revolving door. I think Gio gets the nod here due to his defense and his speed. Although don’t be surprised if it is not Gio who ends up here with the talented Freshman and Transfer class that Jay Johnson brought in

I mean what else do I really have to say…. You know what I’ll just give you Dylan’s stats .362 18 home runs and 42 RBI’s This guy is raw talent, the college version of Mike Trout. Dylan can do it all he can field he can hit and he can throw. There is nothing this guy can’t do and he will hold down right field the entire season for the Tigers.

Here comes the first new guy on my list and it is Josh Pearson. Josh so far has been one of the best players in the fall scrimmages and he is a pure talent. The freshman has an amazing bat that should do the Tigers well this season and for many years to come.