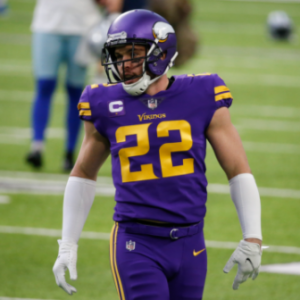 The Minnesota Vikings had a few big issues in the 2021 season. 1 of those issues, head coach, has already been solved. But from the player standpoint, there where about 3 positions that will 100% need to be fixed in the draft, and 4 other positions based on what else happens this offseason with trades, contracts, and resigning. I did not take free agency into account when I made this. Also, I only accounted for round 1 and 2 players, not later rounds.

Opposite Patrick Peterson, cornerback was a HUGE issue this year. Pat Pete did not get a interception until week 18, Cam Dantzler struggled this pre-season and brought some of those issues into the regular season, where he most notably allowed 2 game winning touchdowns vs Detroit and Dallas, we had the Bashaud Breeland deal, who played horribly up until his practice breakdown. Mack Alexander also struggled, and guys like Kris Boyd, Harrison Hand, and Tye Smith did not see the field besides special teams. Any rookie would see imediat playing time and would be a huge boost to now DC Ed Dontatell’s new defense. In specific, my favorite guy would be Sauce Gardner out of Cincinnati.

Oli Udoh was bad. And I mean, bad. So many holding after holding calls against 74. At the start of the year, it was thought Oli could be the long term solution at LG, but he played himself out of that spot fast. Mason Cole also had a few starts, did not play nearly as bad as Oli but still not great. A rookie like Kenyon Green would be perfect, but this may be a position we address in free agency more likely then the draft.

Nick Vigil played great at the start of the year, but died off. Anthony Barr had a career year, but with both of those guys being free-agents, its unlikely either of them will stay. This is a must-adress position during the draft. A guy like Christian Harris in round 2 or 3 would be a great start, along with a free agent, like Leighton Vander Esch.

For Tight End, it all depends on if Tyler Conklin is resigned. He had a career year, but may be too expensive to keep.  QB, its really unlikely Kirk is traded, but backup QB could be a issue if the new coaching staff is not fond of Kellen Mond. Strong Safety is set with Harrison Smith, but with Free Safety Xavier Woods hitting free agency, it depends if we thing rookie Cam Bynum’s 2 games in Harrison Smiths absents due to COVID where what we’d see from Bynum going forward. EDGE would depend if we think DJ Wonnum, who had a career year and a great game on MNF against the Bears, is the answer, of if we run a 2 DE set, and rotate Wonnum and rookie TBD. Also if Danielle Hunter wants out due to his contact situation. Also it was said by DC Ed Dontatell that Daniell could run some stand up OLB this year, and if we need a true 3-4 defensive end for when that happens.