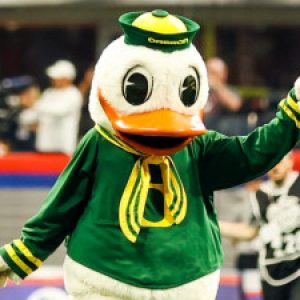 Oregon had a very rough first week on the road vs Georgia, losing 49-3. However, the coaching staff and the players have bounced back following the loss. Since the 1st week, Oregon is 3-0  and has taken down 2 undefeated teams.

The second game was against Eastern Washington (EWU). The Ducks dominated this game at home, winning 70-14. Coming into the matchup, Oregon was favored by 26.5. Eastern Washington was ranked the #11 team in the FCS. Bo Nix threw for 5 touchdown passes and the team looked dominant, as they should’ve.

The following week, the Ducks took on BYU in Autzen Stadium. BYU was fresh off of a home win against top 10 ranked Baylor. BYU traveled a long distance against a team that they may have potentially underestimated. Oregon was without starting OL Steven Jones, and BYU was without 2 starting WRs. It seemed as if BYU’s missing WRs did not seem to play an impact, as Oregon absolutely manhandled the #12 team in the country. With 3 rushing TD from Nix and a good defensive performance, Oregon moved on to 2-1 with a 41-20 victory.

The most recent game, a road game @ Washington State, was much more challenging then the two weeks prior. Oregon came in as 6.5 point favorites on the road, expecting an easy victory, however, that did not come. After failed red zone opportunities and a pick 6 from Bo Nix, Oregon found themselves down 17-9 at halftime. The scoreboard did not fairly resemble how I thought each team played. I felt that the Ducks dominated, however, just could not find the end zone. Without the pick 6, the game probably would have been 12-10 at halftime. The teams went back and forth to start the second half before Washington State QB Cameron Ward threw a TD at the goal line to make it a 34-22 ball game. With only about 7 minutes remaining, almost all Oregon fans had lost hope. That was before a 75-yard drive that resulted in a Cam McCormick touchdown, and a defensive stop. After getting the ball back down 6, Oregon QB Bo Nix delivered a dart over the middle to WR Troy Franklin who broke a tackle and found the end zone. After a successful 2 pt conversion, the Ducks led 37-34. Oregon’s defense had not played an impressive game up to that point and it was imminent that they would need to stop them if they wanted to come out of Pullman with a victory. Instead of a stop, they got a Pick 6 from OLB/DE Mase Funa, who jumped a screen pass, ran it back, and promised a victory. After a garbage time TD, the clock expired and Oregon had officially escaped Pullman, WA.