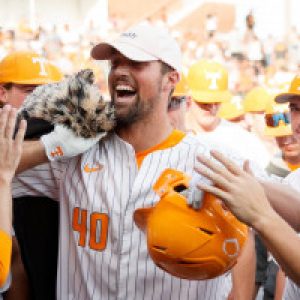 Vols vs The World

After a disappointing end to a promising season, the Vols will go for it again next year, with a lot of the same guys they had this year. Here is a look at who the Vols will feature once November rolls around again.

Perhaps the largest decision on the whole roster, star freshman Kennedy Chandler will have a huge choice to make. He is currently projected a mid-to-late first round selection. It is in this range where freshmen tend to decide to return to school, and Chandler is right on the curb of that range. Another year for Chandler would benefit Tennessee so much, as he would be one of the best point guards in the country. But, Chandler is likely ready to get drafted, leaving the point guard spot open.

Vescovi recently declared for the NBA Draft, but has the option to return. He is likely entering to get feedback and enhance his game, as he is expected to return. Vescovi was among the best shooters in the SEC last season, and with seemingly unlimited stamina and pesky defensive skills, Vescovi could be one of the best guards in the SEC if he chooses to return.

One of the best defenders in the SEC, James’ draft stock has been on the rise as of late, and rightfully so. James has the ability to guard 1-4 on defense. Primarily played as the 3 in the Vols lineup, he’s been featured at the 4 too when needed. James is a streaky shooter who can get hot really quickly, but can go ice cold too. He has an unstoppable mid-range pull-up game that should translate to the NBA well. James is more of a toss-up, as he is expected to go through the process but unsure if he will return.

The Incredible Fulk’s, six years, program leader in games played, time has come to an end in Knoxville. He played on many great Vol teams, from the Grant Williams era to the 2022 SEC Championship Vols. Fulkerson’s presence both on the court and on the bench will be thoroughly missed by the Vols, as he could light up the court with pretty post moves and electric dunks.

VBJ, a teammate favorite, chose not the go through senior day festivities, signaling he will play a sixth year in college. Bailey will transfer though, heading to George Mason to team up with former Vol assistant Kim English. Bailey spent three years at UT, sitting one out due to the old transfer rules, after transferring from Oregon. Bailey was a defensive standout in his final season in Knoxville that included a game-tying bucket on a trip to his hometown, Austin, against Texas.

Not your average walk-on. An East Tennessee native, Jancek played a huge role on the scout team in practice, training players like Grant Williams and John Fulkerson by mimicking opposing defenders. Coach Rick Barnes had always said Jancek was ready to go into the game if the Vols needed him to, and he always embraced his role on the scout team. Jancek, who will transfer to find a larger on-court role potentially at the D1 level next year, was a true teammate and good sport.

5’9 who cares? ZZ, a fan favorite in his first year on Rocky Top, was named to the All-SEC Freshman and Defensive teams. Zeigler, who has an incredible backstory, was just a kid from Long Island who was recruited by the Vols after an impressive performance in a late AAU tournament. Zeigler bet on himself throughout his career, and it’s paying off as he lines up to be the Vols point guard if Chandler goes pro. Already with one start under his belt, Zeigler is a speedy guard who has quick hands and isn’t afraid to get under a defender’s nose and be a pest. Zeigler will be one of the main guys for the Vols next year.

An energetic fireball, Plavsic, who got into opposing players’ heads’ often will return for his senior year in Knoxville. He will need to work on his strength and conditioning if he wants to be one of the best SEC big men next year, but he has the height and the skill set to do it.

Nkamhoua was having the best year of his career before an ankle injury shut him down the rest of the year. Nkamhoua should step right back into the 4 spot he left after his injury. He provided a shooting option for the Vols, and is another guy with a nice post bag and natural defender.

Huntley-Hatfield picked up right where Nkamhoua left off, stepping into the 4 role. He was magnificent late in the year for the Vols, so he should be able to challenge Nkamhoua for the starting role. He can shoot sometimes, and he has the athletic abilites to play against top competition.

A late bloomer, Aidoo was set to redshirt before the Nkamhoua injury forced him into the regular rotation. An excellent shot-blocker, Aidoo should be a valuable backup to Plavsic. Him and Huntley-Hatfield should be the two bench bigs in Rick Barnes’ common 4 big men rotation.

Powell, who transferred in from Auburn last year, never got into the role he was expected to take, even being squeezed out of the rotation at the end of last season. He is a decent catch and shoot shooter, but struggles to create his own shots. He could be asked to start if Vescovi or James departs, but he will likely be a key guard off the bench next year.

Mashack, who was used in defensive/rebounding situations last year, has all the defensive tools to be successful in the SEC. It is just his offensive game that needs work. Mashack will look for an expanded role of the bench next year, with potential to become Josiah-Jordan James 2.0.

A small role last season doesn’t look like it’ll get much larger next season. An athletic guard who can play some forward too may be on the bench once again.

Famous in Knoxville for this griddy, Tamba redshirted and was an energy factor on the bench. He does look to be the odd man out in the big men rotation, but he can step into the picture in the future.

The only commit in the 2022 class, Edwards is rated a 4-star across the board. He is a Knoxville native and will likely be the backup point guard to Zakai Zeigler next season.

The Vols are still showing interest in a couple of elite prospects in the 2022 class, including Malik Reneau, Skyy Clark, and Julian Phillips. These guys could start or feature off the bench depending on other decisions.

In the transfer portal, the Vols will be in the mix for guys like Brandon Murray (LSU), Tyreke Key (Indiana State), Will Richard (Belmont), Jaelin Llewellyn (Princeton), Fardaws Aimaq (Utah Valley), Cam Hayes (NC State), and Nigel Pack (Kansas State). All these guys would be major impact transfers, as the Vols are relatively thin at the guard position. Aimaq is the exception, but he would immediately start at the 5 if the Vols were to grab him.