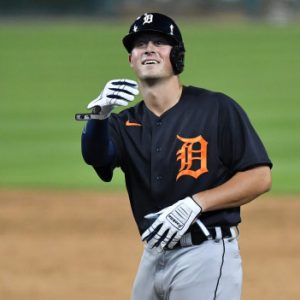 What to Make out of the Tigers first 6 Spring Training Games?

The Detroit Tigers this offseason finally decided to spend. The first big splash of free agency for them  was signing former Red Sox ace Eduardo Rodriguez to a 5yr/$77M deal. Next, They locked in star shortstop, Javier Baez to a 6yr/$140M deal.
The Tigers seem to be heading in the right direction this season which makes spring training much more exciting than in the past. Here are some players making the most of spring training so far.
Tyler Alexander:
“He’s most likely to start the year in the rotation,” Tigers manager AJ Hinch said. “We’re not convinced that we can get Michael ready. We’re going to see, but we’re planning (Alexander) mentally and physically to be a starter.”  In one start on March 22nd vs. the Phillies, Alexander pitched 2.0 innings, without allowing a single baserunner, and notched one strikeout against former MVP, Bryce Harper on an 89.8 mph sinker to conclude the first inning. Alexander hasn’t had much success in the past as a starter. He’s gotten better each year of his career, so it will be interesting to see how he does to begin the 2022 season.
Akil Baddoo:
The former rule 5 draft pick has continued to prove he is an MLB-caliber player this spring. He’s collected five base hits in 10 at-bats and went 3-3 with a double today. His last hit was a single off of a lefty which was one of Baddoo’s main struggles last year hitting a measly .214 against lefties. The assumption for Baddoo is that he will be the everyday left-fielder.
Spencer Torkelson:
Spencer Torkelson is hitting .333 (4-for-12), including two doubles both to opposite-field. Torkelson showed off his elite power last season at all minor-league levels. Torkelson hit 11 home runs in 40 games in AAA, and 15 in 50 games in AA. Torkelson also flashed the leather the other day, reeling in a wild Javier Báez throw adjusting to tag Alec Bohm. I believe Torkelson should make the opening day roster and will probably be eased into the everyday first basemen while Miguel Cabrera wraps up his journey to 3,000 hits.
Eduardo Rodriguez:
Eduardo Rodriguez spent no time getting accustomed to his new team. In today’s outing, he pitched 4.0 innings, allowing two hits, an earned run along with five strikeouts. The sample size for Rodriguez’s early success in Spring is certianly not enough, but statistics suggests E-Rod will have another great year pitching. Last year in Boston, Rodriguez had a career-worst 4.74 ERA, but had a 3.50 xERA which shows that Rodriguez had an unlucky year last year. Rodriguez will most certainly be the #1 pitcher in Detroit.
All of this Member's Articles